New post, now for something more positive. Since my last one, I have been getting a tremendous amount of support for my next project. It feels very good to talk about fresh stuff. But some people seem doubtful about my GameMaker choice.

... aaaand I definitely can understand that. It sounds like I was making real games using real tools before at Arkedo, and like I'm now playing with an old E-jay shareware for dummies.

Very few game developers (and gamers) really know what can be achieved with GM, so let's talk a bit about it. Even if you knew GameMaker years ago, you could be surprised by the features recently added.

First things first, here comes some great PC games you could know, made with GameMaker: 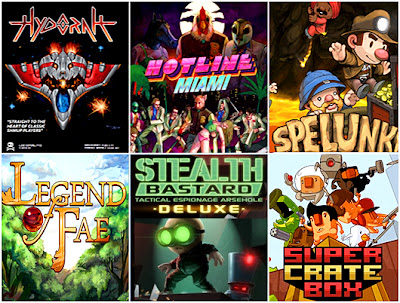 ► What was the "old" Game Maker, as you may remember it?

GM is born more than 10 years ago from a teacher named Mark Overmars, for an educational purpose. Using simple Drag n' Drop actions, it has given to total beginners the opportunity to make small games of their own.
The technical performances were kind of limited, but the very smart visual interface was a design tour de force.

Then a script language (called GML) was added, and a growing talented community made extensions, DLLs, and more. That way, you could find young beginners using only Drag n' Drop actions for simple tests, and advanced users using GML scripts to bring very rad games like the ones above.

This classic Game Maker software is now kind of frozen for about one year.

- GM is now integrated to Steam, with Cloud support for the projects, and even SVN.

- The exported games run in the appropriate language on each platform (no more Delphi!), which bring performances on par with natively written games. (I'm very impressed to see how runs my PC prototype on a retina iPad)

- Better performances mean you're not restricted to retro inspired games. I just love 8/16-bits inspired titles, but now if you want huge sprite sheets and know how to handle texture pages management, you're more than welcome in the HD era. Even with shinny additive blending FXxxxx.

- GMS even includes "evil features" like In App purchases, Flurry, Ads support, Facebook / Twitter integration, etc... You definitely can make your shameful freemium with tons of "Coin Doublers" and "Click this ad to get a 40 coins reward!" features. (Please don't)

- There even is a physic engine. I never used it for now, so I can't tell anything good or bad about this, but here you can watch an Angry Bird clone creation, if Box2D is your kind of thing.


► Now I would like to try it for real game production, what do I need to know?

If you're a regular beginner: nothing, just go for it. You'll need patience, good ideas, and the most important, to learn to finish a game. Maybe you could just stick to the free regular GameMaker for now, if you're not interested by multiplatform exports.

If you're an experienced game developer, used to more classic environments,here come some notes.

- GM is mainly made for 2D projects. Crazy guys do crazy 3D things with it, but Unity seems a way better choice for now if you want 3D gameplay.

- You still can use Drag n' Drop actions for basic design, but most of the "pro" features use GML script language only.

- One tool is missing: where is the Particle editor?.  Problem solved here.

- The documentation and WIKI are great, but the forums and the google results can be misleading at start. Because of the two versions having different behaviors (regular GM vs GMS), you always have to be careful when reading a tutorial. Is it for Studio or not?

That said, there are TONS a good tutorials everywhere for both. And once mastered, the messy forums are in fact very, very useful.

- Due to the educational purpose of the original GM, you'll face professionals AND regular users at the same place. Please don't panic. I'm personally more than happy to read dumb questions, there is always a chance to learn something from the answer. (You'll probably read some dumb questions of mine, too).

- GM Studio evolves a lot. New features come every month, like the cross platform network capacities added last week. Stay tuned, have a look at the roadmap (shaders, linux...), and read the changelogs closely. Maybe follow the YoYo team on twitter to get sneak peeks and news on upcoming things, too.

- GM Studio allows super fast game development, but can't do magic. Yes you'll have to pay the $100 developer fees from Apple, and yes you'll need a Mac connected to compile your iOS project, even if you do 99,9% of the work on your PC. Expect a very cool tool, not a miracle.

I hope many devs will try the new GMS in the future, it's just great. And as titles as The Binding of Isaac shown to many, even with a very simple technology, a great game is a great game, made with Unity, GameMaker, Flash or Unreal... Let's make cool things now!

Search in this blog